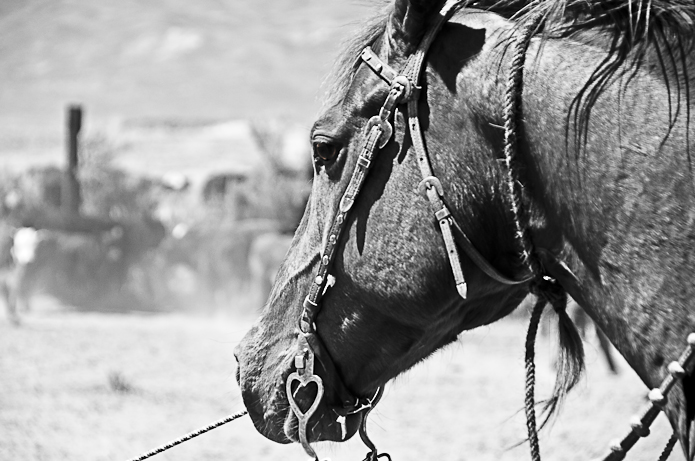 From the fine craftsmanship of rawhide braiders to the expertise and finesse of a true bridle horse man, traditional vaquero horsemanship and its gear are functional art forms passed down through centuries.  It is a proud legacy, continued today with due reverence on the ranch and range, and in the show pen.

In the year 711 AD, the Moors began their invasion of Spain.  While the African horses were far inferior to Spanish horses, the Moors brought with them a distinct style of horsemanship that would be gradually adopted by the Spanish.  Perhaps most notable about the Moorish methods was their use of various types of leather and rawhide nosebands, which were the ancient precursor to the hackamores used today.  After 800 years of adaptation and refinement, Spanish horsemanship arrived on the North American continent with the conquistadors and their highly trained Andalusian war horses.

As the Spaniards settled and developed massive ranching empires the new world, the usefulness of warhorse training methods naturally extended to working ranch horses. The cattle were notoriously wild, and the country often tough for man and beast alike, so the vaqueros needed reliable working partners.   Over several hundred years of Spanish rule, the age-old warhorse training techniques were applied, and eventually led to the creation of the legendarily responsive and agile reined cow horse.

While the Spaniards had also been using snaffle bits for centuries before coming to the New World, the use of the originally Moorish hackamore became a necessity, since the horses originally brought from the old country had bred, spread, become mostly wild; using a jaquima (hackamore) was a way to start and train the powerful animals without damaging their mouths. Colts were not started as young as they are today; it was not uncommon for vaqueros to begin the training process when horses were five or six years old since older horses were developed and mature enough to better withstand the rigors of ranch work. An incredible degree of “horse psychology” was necessary as well; the tenet that the effectiveness of any tool is only a reflection of its user was as true then as it is now.  And as it is today, in Spanish California, a bridle horse was highly revered as the pinnacle of horsemanship accomplishment.
Colts today are often started in snaffle bits, perhaps after a few initial sessions wearing just a halter, but there remain a number of horsemen who prefer the hackamore alone for early training.   Several thorough and insightful books  have been written over the years that are dedicated to the art of hackamore horsemanship, which includes not only the use of the hackamore itself, but the progression to the two-rein and then to the bridle.   The hackamore outfit is made up of the bosal (noseband), the hanger or headstall, and mecate reins.  The size of the bars (sides) of the hackamore should always match the diameter of the mecate.  Depending on the shape of the horse’s head, there is sometimes a thin string that is tied to the headstall on both sides and runs under the horse’s jaw to help keep the headstall from bumping the horse’s eye.

A horse’s face is full of nerve endings and very sensitive.  In the practice of jaquima to freno, a colt will be started in a large diameter bosal, and as his learning progresses, the size of bosals and mecates decrease, with the objective being to initiate the most response from the least contact.   When the colt has reached a high degree of responsiveness in the smaller hackamore outfits, he will graduate to the two-rein.  He’ll wear a bosalita (little bosal) as well as a bit with reins.

In the first stages of the two rein, the horse just carries the bit in his mouth with no pressure on it from the rider.  Gradually, the horseman will transfer the signals given from the bosalita to the bit by adjusting the length of the two sets of reins in his hand.  When the horse has learned to be sufficiently responsive and confident with bit signals, the hackamore outfit will be removed and the horse can be called “straight up in the bridle.”

With many combinations of cheekpieces and mouthpieces available, there is no one “magic” bit.  Each horse will have bits they like and do not like, and the modern day bridle horse man usually has quite a collection of bits to help facilitate the best communication possible between horse and rider.

Following this traditional progression has value beyond the finished product; the strong foundation makes it possible for the horseman to revert to earlier stages of training as necessary.  This allows for not only the fine-tuning of maneuvers, but also the maintenance of a horse’s confidence and trust in his rider.

Done correctly, the process can result in a truly exceptional mount, and such horses have long been admired and desired.  The Moors were known to race their horses to demonstrate their endurance and resiliency on the battlefield, and thus establish their value.  The Spanish California vaqueros famously roped grizzly bears and staged various contests to showcase their horses’ sliding stops, spins, nerve, and cow-working prowess.

One game was called once (eleven), and vaqueros would run and slide their horses to a stop.  The horse’s hind feet would leave parallel tracks like 11s, and the longest 11 won.   In another contest, riders would choose a cow from the herd and move it to a fenceline, and what followed was something like a combination of soccer and ping-pong.   Three riders would space themselves at equal distances along the fence, and one rider would try to drive the cow past the rider in the middle.  If he succeeded, the third rider would then try to push the cow back past the middle rider.

The National Reined Cow Horse Association (NRCHA) was formed in 1949 to preserve the rich and beautiful tradition of vaquero horsemanship.  In contests that are very similar to the old vaquero games, horses are shown reined work (also called dry work), herd work, and fence work, with the combined score of the three classes determining the winner. (Grizzly bear roping, however, is conspicuously absent.)

In the dry work, the horse and rider teams complete a reining pattern that consists of a combination of figure-eights, sliding stops, spins, and backing up.  The herd work portion requires the team to sort a single cow from a herd and then keep it from getting back to the herd, while fence work pits horse and rider against a single cow turned loose in the arena.   Contestants must “box” the cow on one end of the arena, working it back and forth to show control before allowing the cow to run along the side fence.  The rider runs his horse with the cow, and then turns the cow against the fence several times before guiding the cow in a circle in each direction.

In the NRCHA, horses ridden and shown in snaffle bits as three and four year olds.   Hackamore horses are required to be five years old or less, so the horse would usually be in a two-rein as a five or six year old.  Horses are allowed to be shown in the two-rein for one year only, after which they must be moved up to the bridle for showing purposes.  This time frame is also followed to varying degrees by numerous ranchers and trainers in the West, but of course, due to circumstances and the individuality of horses, not all horses become bridle horses at the same age.  Regardless, the finished product has been a horseman’s treasure for centuries.

Naturally, the passing of time has brought innumerable changes and advancements in every facet of life, and the technology and convenience we enjoy in the modern world are beyond the wildest dreams of our ancestors.   In this hectic digital age when most of the old ways have, at best, slipped into our collective distant memory, vaquero horsemanship remains a practical and highly effective method of stock handling and a cherished art form.

At J.M. Capriola’s, we are proud to be guardians of this tradition.

Reinsmen of the West:  Bridles & Bits by Ed Connell

Reinsman of The West

Vaquero Style Horsemanship:  A Compliation of Articles and Letters by Ed Connell

Bits, Bitting And Spanish Horses by A.R. Rojas
The Art of Making A California-Style Vaquero Bridle Horse  by Mike Bridges