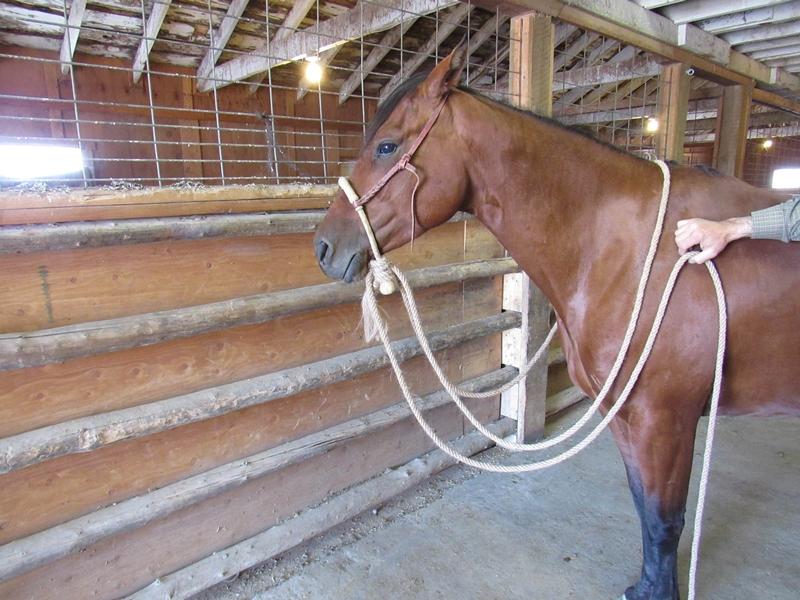 The jaquima,  or hackamore, could be called the signature piece of traditional vaquero horsemanship because of its unique role in the progression of a “green” colt to a finished bridle horse.   Over the years, the use of a hackamore has shifted from an essential training tool toward more of an instrument of art, practiced by the most skilled of vaquero horsemanship purists on the ranch and in the show ring.

In the late 1700s, vaqueros from northern Mexico came to what is now California to work on the vast ranchos created by Spanish land grants.  With them, they brought equipment and techniques that had come with the Moors to Spain and were gradually refined over the centuries.  While today most young horses’ early training is done in a snaffle bit, back then, colts were started and ridden in some kind of jaquima outfit until their baby teeth were shed, and their mouths were mature enough to easily accept a bit, usually at around age 6.  Horses were commonly ridden in the hackamore for years. With modern equine dental care, young horses can be better protected against the potential discomfort of a bit, making the hackamore a less vital tool in training the cow horse.

Nonetheless, a number of modern horsemen adhere to the old ways.  For those who are experienced in the discipline, nothing compares to a horse brought through the traditional progression of the hackamore and two rein to finally become a bridle horse.   The main advantage of the hackamore is that it keeps the horse’s mouth untouched, leaving it fresh and extremely responsive for the bit to be introduced during the two-rein stage.

A standard hackamore outfit is comprised of the bosal, hanger (headstall), and mecate.  Some outfits also incorporate components that work in various ways to keep the bosal in place as necessary, such as a fiador and browband, a cheek string, or a forelock hanger.  Traditional bosals are hand-braided from a variety of materials—usually rawhide–and in a variety of sizes.   Every facet of the construction of a bosal translates to its effect on a horse, down to the most miniscule detail.  The inherent differences in horses dictate what type of bosal will be most effective, and the dedicated hackamore horseman will have a variety of outfits to help him find the best option for an individual animal.  A network of facial nerves relay the rider’s signals to the horse’s brain, and things like the thickness of skin and even the density of hair play into the success of communication between horse and rider.

The degree of stiffness of the core correlates to the kind of “life” in a bosal; having some spring in it is important to help clarify the point of release.  Rawhide is generally preferred for a core.  Stiffer cores are more severe.  Braided over the core are four parts:  the heel knot, cheeks, side buttons, and nose button.  The heel knot is the base, usually made by some variation of what braiders call the pineapple knot.  Nose buttons are 6 ½ to 7 ½ inches long, which corresponds to the pressure points on the bridge of a horse’s nose. The braid of a nose button is a key feature of a bosal; a button with more and finer strings will be soft and supple with string edges blending more smoothly into the braid, while a braid with fewer and wider strings can be harsher.   The side buttons work to keep the ends of the hanger from sliding out of place as well as aiding lateral cues. The cheeks are generally braided with wider and fewer strings than the nose button and side buttons.  The most popular diameters are 1 inch, ¾ inch, 5/8 inch, and ½ inch, and generally, horses start in a larger diameter bosal and work down in size as their responsiveness increases with training. When setting up a hackamore outfit, the diameter of the mecate should always match the diameter of the bosal cheeks.

Bosal length usually varies from 10 inches to 12 inches when measured inside from the bottom of the nose button to the top of the heel knot.   Some riders prefer a longer bosal, as it allows for more wraps of the mecate above the heel knot, which they believe provides more weight and a more distinct signal.  Still others prefer a shorter bosal and a lighter overall set-up to prevent accidental, confusing signals.

Correct fitting and placement are essential to ensure that cues are relayed effectively. The bosal’s nose button should generally rest on the bridge of the nose approximately half way between the horse’s eyes and nose, with the heel knot and mecate wraps resting at the chin, without any tight spots or excessive gaps anywhere. The heel knot should always hang lower than the nose button.  With horses’ individual physical characteristics, placement might vary within an inch or so when finding the spot where the horse is most responsive to cues.

The argument can be made that successful hackamore training requires a greater degree of horsemanship than other methods.  With no bit, the design of the hackamore is such that a horse can’t be forced to submit to pressure, making the rider work more on the horse’s terms.  The design and weight of the hackamore give the horse more opportunity to receive a cue, but the rider must also have comparable life and responsiveness in his hands to offer release at the appropriate time.  Hackamores should work from signals of motion; the wiggling or gentle bumping of the mecate reins result in a rocking motion of the bosal.  Direct pulling only encourages the horse to push back, and will create dullness and lack of response.

While no longer a necessity, hackamore horsemanship is not only used, but also celebrated.  Originally called the California Reined Cow Horse Association, the National Reined Cow Horse Association (NRCHA) was formed to preserve the vaquero tradition.  Horses are first shown in the snaffle bit as three-year olds, and can then be shown in the snaffle or hackamore as four and five year olds before graduating to the two-rein.

Part of the NRCHA’s Merit Award Program, the highest and most coveted award in the NRCHA is the Supreme Reined Cowhorse Award.  It is given only to horses that have earned at least $1000 being shown in each stage of training, and have lifetime earnings of at least $25,000.

When approached correctly, hackamore horsemanship can be a rewarding and fulfilling endeavor for the horseman looking for a new challenge and skill refinement, as well as for the developing rider under the tutelage of an experienced trainer.

There are different ways to tie the mecate to the bosal when setting up your hackamore outfit.

We’ll show you one method: 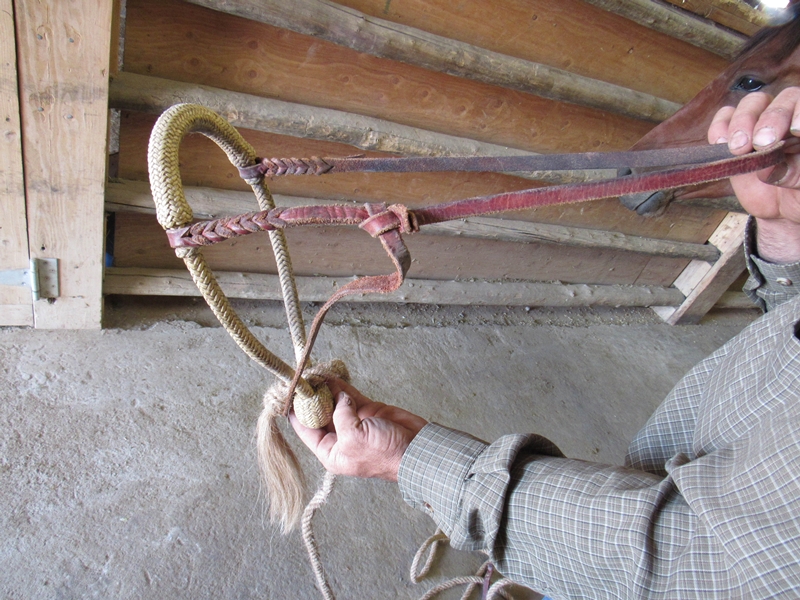 Place the tassel end of the mecate through the bosal in the V above the heel knot. 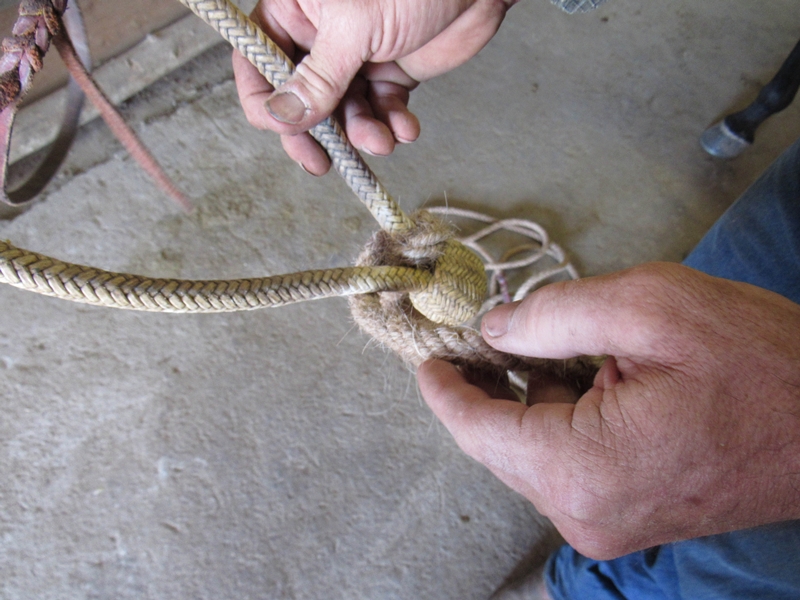 Bring the long end around in a counter-clockwise direction, laying it above the tassel end. 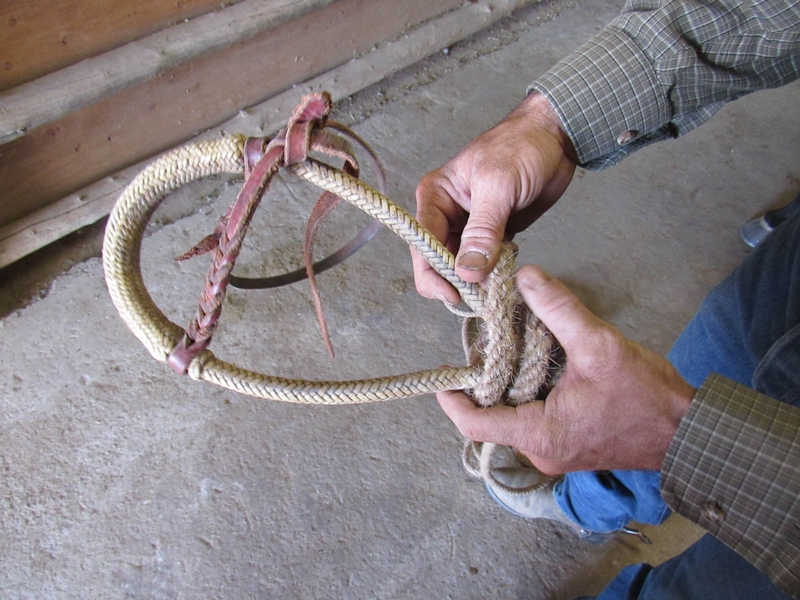 Continue wrapping in a counter-clockwise direction. Number of wraps can vary according to bosal length and personal preference. 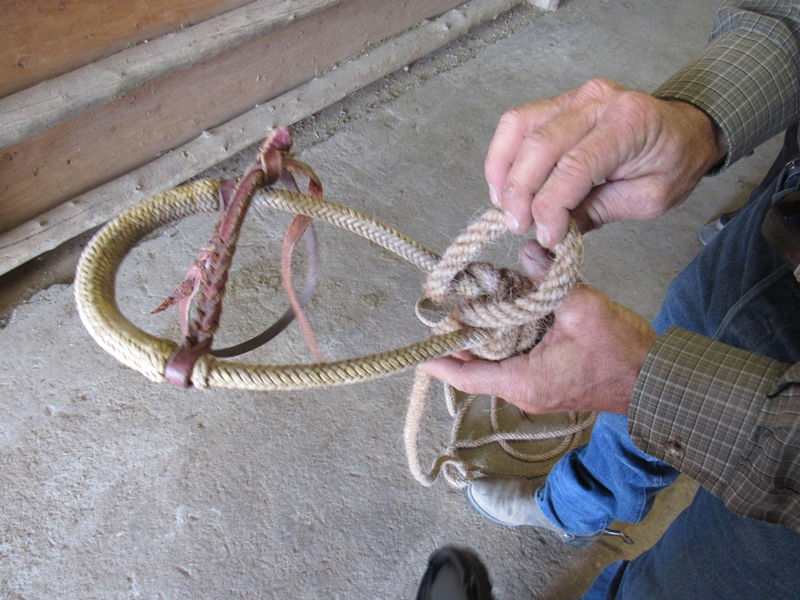 Bring what will be your rein loop back through the bosal above the wraps,

and measure it out to your desired length. 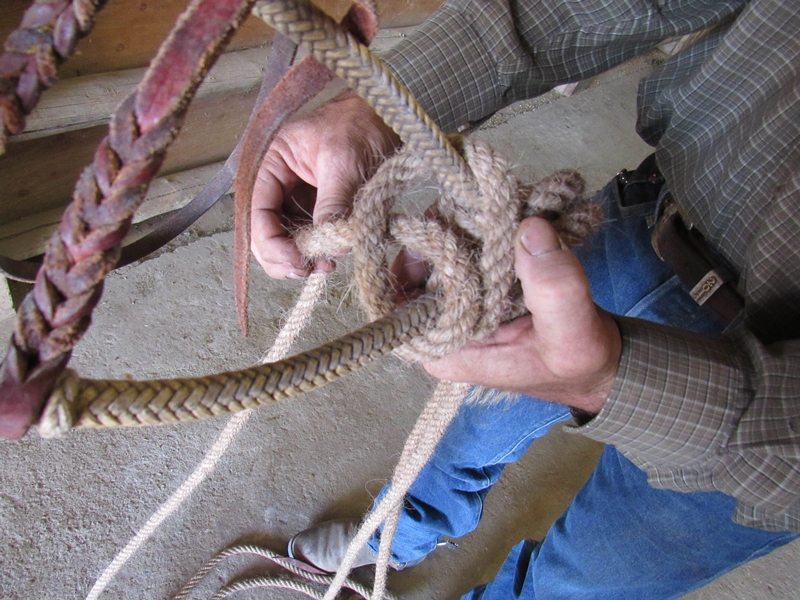 Make another wrap over the top of the rein loop, but feed the popper end of the mecate back under the wrap on the inside of the bosal to create the get-down.

Number of wraps and rein length can be adjusted as needed.

More reading on the subject: