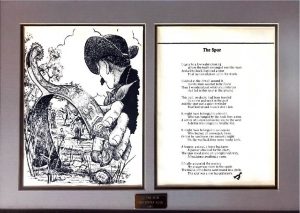 I came to a low water crossing

Where the trails converged near the bank

And all by itself, I spotted a spur

That lay buried plum up to the shank.

I kicked at the dirt all around it

But its mate was not to be found

Then I wondered just what circumstances

Had led to this spur in the ground.

This trail, no doubt, had been traveled

By sinner and saint in the past

And the spur was a quiet reminder

That leather and muscle don’t last.

Who was hanged by the neck from a tree

A settler who drowned on his way to the west;

A drifter who longed to breathe free.

Who bucked off a renegade bronc

Or lost by two lovers one romantic night

On the way back from some honky tonk.

A trapper, a scout, a brave buckaroo,

A panner who died for his claim,

A headstone awaiting a name.

I finally unraveled the mystery

My answer was there in the sands

The tracks of his horse went round in a circle,

The spur was a one leg-ged man’s.