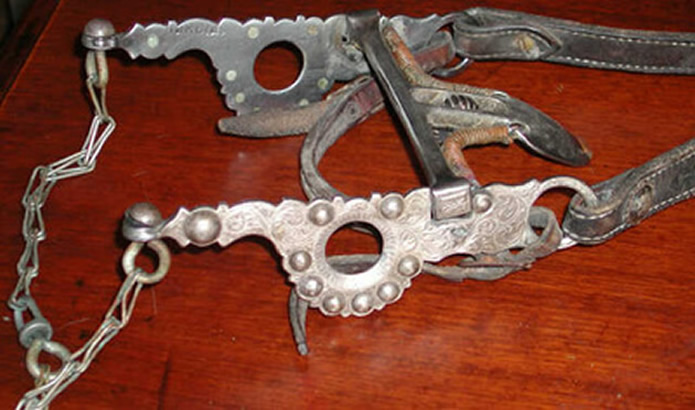 For every form of art, there are artists, and there are imitators. It is said that imitation is the most sincere form of admiration, and throughout the ages, the most famous artists have naturally been the ones most frequently imitated. The same holds true for the art of silver bit and spur making.
It is easy, then, to understand why Garcia, based in Elko, Nevada, is one of the most regularly imitated bit and spur makers today. The Garcia legacy is a rich one, spanning a century with a name synonymous with excellence. Garcia bits and spurs have been a deeply rooted part of our Western heritage since the late 1800s, introduced during the heyday of the cattle industry, immediately becoming an integral part of the American cowboy legend. It was in 1894 that the young Guadalupe S. Garcia left his home and business in Santa Margarita, California behind to seek his fortune in Elko, Nevada. At that time, Elko was a booming cowtown, a virtual Mecca for working cowboys–cowboys that appreciated the quality gear that Garcia had spent years learning to make. Garcia’s intuition paid off; his fledgling Elko business (G. S. Garcia Harness and Saddlery) was so wildly successful that it was necessary to relocate to a larger building after only a year of business.
Encouraged by his success in the Elko area, Garcia introduced a catalogue in 1899, which offered the quality products to a broader range of customers. Included in the catalogue were the beautiful bits and spurs, sought after even then by cowboys everywhere. For the working cowboy, there was no better source for beautiful, consistently well built tack. Even so , Garcia knew he could be better still, and set out to show the world the skill of the small-town artisans by crafting the most exquisite saddle known to man. Using the finest leather, gold, silver, and diamonds, the Garcia craftsmen built the World’s Fair Saddle, which won gold medals at not only the St. Louis World’s Fair, but at the Lewis and Clark Exposition in Portland , Oregon as well–an achievement unmatched before or since. 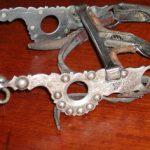 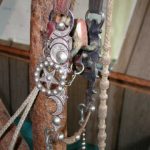 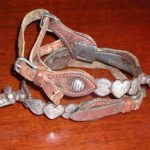 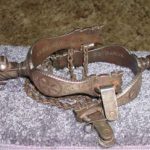 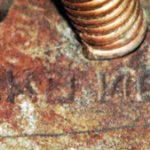 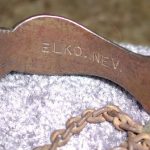 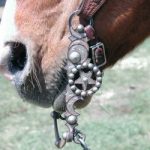 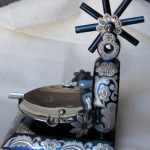 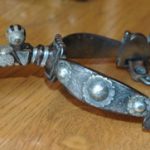 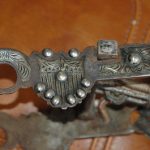 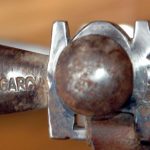 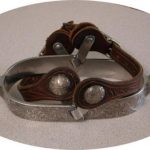 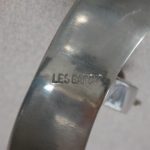 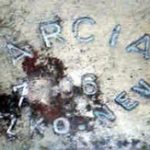 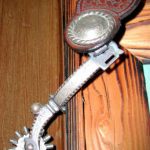 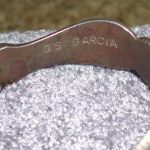 With that, Garcia was vaulted into world-wide fame, and the little saddle shop remained a successful part of the Elko economy until 1933, when Guadalupe Garcia passed on. The legacy was left to his three sons, Les, Henry, and Eddie, who moved the business to Salinas, California. Bits, spurs, and saddles were all crafted at Garcia Saddlery until 1957, when Les took the silversmithing business to Reno, Nevada, establishing Garcia Bit and Spur Manufacturing Company. In 1978, Doug and Paula Wright, owners of the J. M. Capriola Company in Elko, bought the Garcia company, thus bringing the name, and the legend, full circle.
Today, Garcia bits and spurs continue to be built by carefully trained Mexican craftsmen who proudly continue the tradition of quality and beauty expected of the Garcia name. The same mouthpiece and cheekpiece designs are used that were used in Guadalupe’s time, with the addition of a few new cheekpiece patterns. Just as they were at the turn of the century, Garcias are still used by working cowboys everywhere.

However, cowboys and horsemen are no longer the only ones in the market for Garcia bits and spurs. Collectors, enchanted and intrigued by the mystique of the old West, seek the vintage pieces like a pirate seeks treasure. Unfortunately, the market has recently been flooded by imitation Garcias, built by unscrupulous makers seeking to profit unlawfully from the trademarked Garcia name.

J. M. Capriola’s in Elko, Nevada is the only place where new Garcias are sold, making it easy to be sure a new bit or spurs purchased is the real thing. However, it is not so easy to be sure of the origin of older pieces, which are by far the most sought after. The pieces from each era are distinguished by different makers marks, which are stamped into the inside of the bit or spurs. Pieces from the G. S. Garcia period bear a variety of marks in different sites, depending on the maker and the year made, but all are a variation on the basic “G. S. Garcia, Elko, Nev.” A few pieces bear an additional initial that represents the maker, though few of Garcia’s employees were allowed this privilege. Pieces bearing a backwards N (in Nev.) are commonly believed to have been built between 1910 and 1920. Pieces from the Salinas period are marked with the words “Garcia Saddlery Co./ Salinas, CA.” Les Garcia’s work sometimes bears the mark “Les Garcia/ Reno,” or simply “Garcia.” Current pieces bear the mark “Garcia/ Elko Nev,” along with a serial number. This numbering system has been in use since 1985. It must be kept in mind, though, that any mark can be easily duplicated with modern equipment, and also, according to Paula Wright, there are some older Garcia pieces that are not marked.

Fraudulent Garcia makers have been known to age the imitations artificially, rusting and rubbing them to simulate wear and use. Paula Wright told of a pair of fake Garcias spotted on the internet, which had well worn heel bands on the inside, but brand new, untarnished silver on the outside.

Another point to consider is that while sterling or fine silver is used today, older bits and spurs were built using coin silver, a much harder metal. Taking into account the harder silver and the more primitive tools of the time, it is only natural that early pieces bear engraving much coarser and less detailed than today’s work.

Although these few pointers may offer a little insight, they are just the tip of the iceberg. There is so much to be considered in seeking a collector’s piece. Research is priceless to any collector, no matter how experienced they may be. Paula Wright emphasizes the importance of “doing your homework,” strongly recommending Ned and Jody Martin’s book, “Bit and Spur Makers in the Vaquero Tradition,” available in a hard-bound coffee-table edition, as well as a pocket-sized version.
“They’re truly a must have for collectors,” said Wright. Wright added that she does not believe true collector’s items would be available on the internet, and of course true new Garcias are not available through any source except J. M. Capriola Co. The internet has opened up a whole new market through which imitation Garcias are sold. The nature of on-line auction sites allow anything with the word “Garcia” in its description to be displayed on screen, with just the touch of a button. The name is well known enough to draw people to it, except most people surfing the web in search of a collector’s piece lack the experience to discern the real thing from the rest. Descriptions of pieces often contain the words “marked Garcia, Elko, Nev,” which indeed, the fake pieces are marked this way, but the clever wording leaves somewhat of a loophole for the sellers should they be caught. Bidding for pieces on the internet pushes the price up far beyond the actual value because people are afraid they will get out-bid on a sought after item, a situation frauds take advantage of. Many times, a set of fraudulent bit and spurs are offered for as little as $280. An individual piece (a bit OR spurs) that is a true Garcia will sell for at least that much. Wright also compared the counterfeit bit market to the counterfeit money market. Just as the most frequently counterfeited bills are hundreds, the most frequently imitated bits and spurs are G. S. Garcia’s.

Wright explained that the best place to obtain a true collector’s piece would be at a well-known collector’s auction, where the promoters and sellers are not only well educated about such things, but their reputations are at stake concerning the origins of pieces sold. Another place would be from someone who has had a piece in their family for years, but unfortunately for collectors, families willing to part with their heirlooms are few and far between.

Above all, the Wrights want people to be aware that there are many frauds out there, and to offer their assistance to anyone wishing to research collectors pieces, built not only by Garcia, but by other reputed makers.
Paula Wright passed away in 2012, but Doug Wright continues at Capriola’s and is at (775) 738-5816, 500 Commercial Street, Elko, Nevada, 89801. e-mail: orders@capriolas.com .

Everyone wants to believe they are getting a good deal on a piece of western heritage. More often than not, though, a little research will reveal that a “great” deal isn’t so great. Shopping for a collector’s piece is a lot like shopping for a car; it takes patience and research to ensure you won’t get stuck with a lemon.

Note: All bits and spurs in the pictures on this page are authentic Garcias, G.S. Garcias, and E. Garcias. Some are old, some contemporary. We want to thank Becky Prunty, Royce Hanson, Mitch Moiola and Buster Aldred for the privilege of photographing their gear.