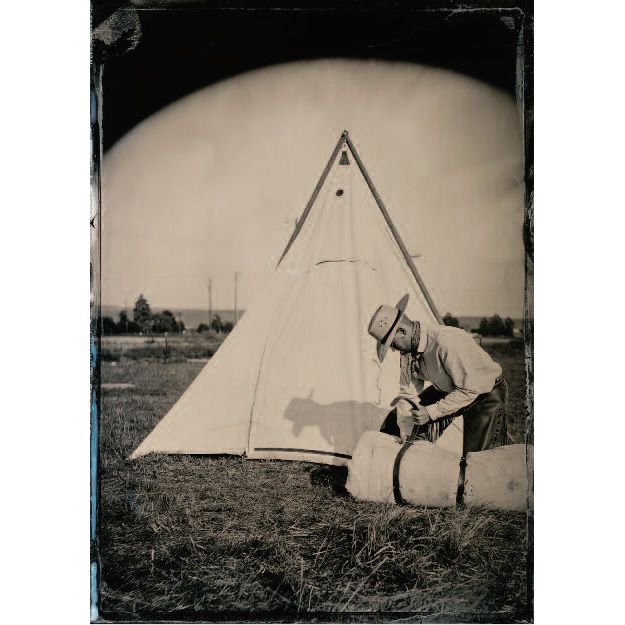 According to J. Evetts Haley, author of the book Charles Goodnight: Cowman and Plainsman, among Charles Goodnight’s contribution to trail equipment was not only the chuckbox, but also the discovery and modification of the bed tarp, which became the cowboy bedroll as we know it today.

Cowboys on the Four Sixes Ranch in Guthrie, Texas, load up their bedrolls to head out with the wagon. Shown are Polly Holler (top), and, from left, Riley Thacker, Jimmy Woods, Royce McLaury, Ellis Keys, Boyce Hart, Ron Conatser and Bob Nelson.

It gave a cowboy a warm, dry, portable place to sleep on long cattle drives.

A bedroll serves many more purposes besides protecting a cowboy from the elements while he sleeps. Texas cowboy Bob Walters, who worked on 16 different ranches, including the Four Sixes, says a bedroll is a professional cowboy’s home. He uses the bedroll as a suitcase, in which he carefully rolls up clothing, gear and other personal belongings when going out on the wagon or moving to a new ranch.

“Having a bedroll is knowing you’ll always have a place to sleep,” adds Bob Walden, a cowboy from Hinsdale, Montana. Walden purchased his first canvas bedroll from J.M. Capriola Company in 1987 when he arrived in Nevada. Inside, he rolled up some sheets and an heirloom wool blanket from his mother’s side of the family. He also bought a mattress from the Salvation Army to put under the bedroll. A portable home,

Walden’s bedroll has traveled thousands of miles, to ranches in Idaho, Montana and Nevada, and reminds him of his carefree cowboy days before he was married.

“The bedroll was pretty much all I owned, so I could easily move from ranch to ranch,” he says. “I rolled my clothes, snaffle and bridle in my bedroll, and then I just had to pack it and my saddle.”